It was about 10:30 in the morning, my dad, Kevin, grandpa Mike, and my grandpa Kenny,
and I all went out on my dad’s boat. I was 8 years old and we were out on Lake Namakagon, the
weather was pretty good, it was not very wet, the sky was blue and the islands I saw around me
were growing and the sun was out. We started trolling over by a bank; it had some weeds where
it was really close to the shoreline. The water was dark so I could only see the rocks where it was
shallow. The bank had dark pines along the edge of the island it was on, I was working my #12
Pink Tiger UV Rapala Husky Jerk back and forth.

I was standing in the front of the boat, in front of the passenger seat. I had been casting
for about 15 casts when I felt a huge pull and I felt an adrenaline rush. I was so excited and all I
was worried about was that it was a huge tree branch or something, but I knew it was not
because I could feel its strong energy pulling drag underneath the water.
It was so hard to reel it in, but I just kept on reeling. I tried not to get the line or fish stuck
in the big white motor in the back of our boat. I had a good grip on the reel so luckily, I did not
get the fish or the line stuck. I kept on reeling until I got the musky by the boat’s side, then my
grandpa Kenny lunged for the net and got ready to catch the fish. I lured the musky into the net,
but it got stuck! It had been so worked up that it got its jaws with the lure in its mouth tied up on
the net. So, my dad had to work the bait out of the muskies jaws before lifting it up to the boat.
My grandpa Mike insisted that I use his green fish holder, so I did. When we were measuring the
fish on the bump board the second my dad said, “It’s a 38er.” I was so excited I had caught my
first big fish! As we took the pictures of me holding my big fish my smile was the biggest I could
make it. 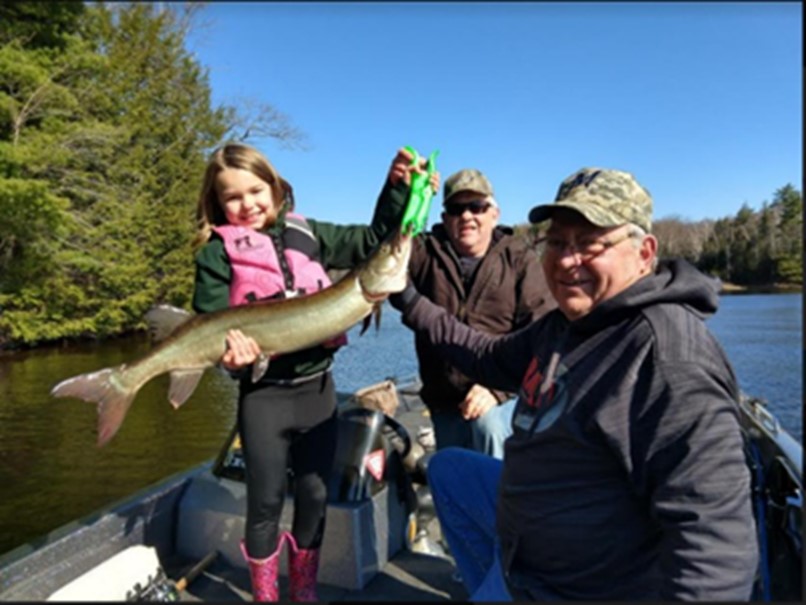 I leaned over the boat edge to let the fish go, I grabbed the tail by my hand and swished it
back and forth to get the water current through its body. I almost let it go too early because the
fish’s tail was so slippery! As we watched it swim through the water, we started to notice that
the fish was still on the surface. So, my dad started trolling closer and closer to the musky so that
we could try to help it. I was a little scared at first because I thought I did something wrong, but I
did not. As we finally got up close to the fish, we helped it swim away and then all was good. We
fished for maybe one more hour then went back to the cabin. I was always so excited when we
were going somewhere far on the boat, it meant that we could go really fast. It was one of the
best days of my life and I cannot wait to catch my next musky.